This time of year I always replay my All-Time favorite summer movies, and 2009's Star Trek is absolutely among them. I love that movie! It reinvigorated the STAR TREK franchise by taking characters and concepts from the '60s and remixed them. It introduced Captain Kirk, Mr. Spock, and the crew of the U.S.S. ENTERPRISE to a legion of new fans and left them wanting more. And what did they find? The Original Series, The Next Generation, and an entire universe that they might never have discovered without Star Trek '09.

Some folks may not remember, but STAR TREK was an enormous hit that summer and played, first run, in some theaters into early fall. Crazy, cool, fun, and exciting, we couldn't get enough, and the whole time we were falling in love with the film's new uniforms. What costume designer Michael Kaplan did with Star Trek's retro-futuristic uniforms was a fresh NEW approach to William Ware Theiss' iconic Starfleet Uniforms. The classic silhouette, shapes and color blocking of the originals were all present and accounted for, right down to the saddle sleeves, and slightly pointed, contrasting collar that now belonged to an undershirt worn beneath the uniform's tunic. And the colors were striking too! Using the original color pallet left behind by Bill Thiess, Mr. Kaplan subtly turned up the color saturation. Another innovation was in choosing a spacey, and well wearing jumbo weight spandex for the tunics and dresses, A material that ensured the crew of the Enterprise looked as cool as the rest of the film. 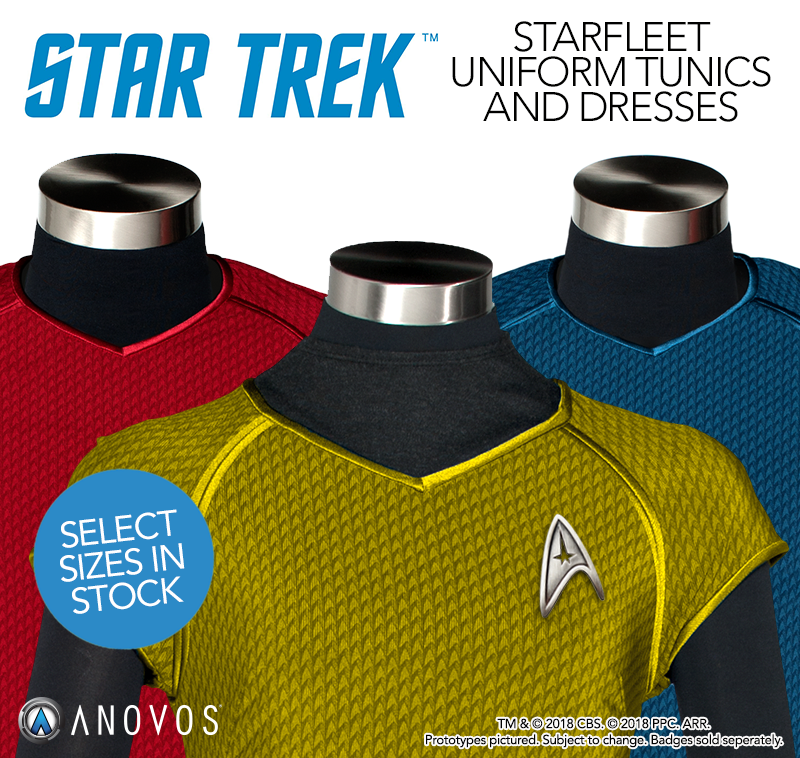 Faithful replica of the uniforms worn in the Star Trek™ movies directed by J.J. Abrams.

There is one additional element that made these new uniforms unique, the continuous "Delta Print" found on all the standard shipboard Starfleet Uniform Tunics and Dresses. When Star Trek '09 was made it was filmed with the knowledge that not only would its effects, sets, props, and costumes have to look amazing on larger than life movie screens, but they would have to withstand even greater scrutiny on the increasingly larger, and higher resolution monitors in people's living rooms. The explosion of super high definition equipment in people's homes led to a new line of thinking among some costume designers working in the sci-fi, and superheroic genres. Traditional textiles can look fairly flat when photographed and displayed in some higher definition formats, and so this led directly to costume designers using repeating prints, and tiny, three dimensional textures printed, or applied to represent futuristic fabrics. It's a trend that continues today.

Recreating those uniforms took a lot of hard work - over a year of effort to do it right and bring it to market.

We worked closely with CBS, Paramount, Bad Robot, and even spoke to Michael Kaplan himself. We got to examine the original costumes, and meet the people who made them for the film. We worked diligently with dye houses, and printers, and learned a lot along the way. But at the end of the day we were rewarded with the most accurate replica of an original costume piece ever offered up to that point. And it was incredibly gratifying, to see people wearing and enjoying that tunic. It still is! 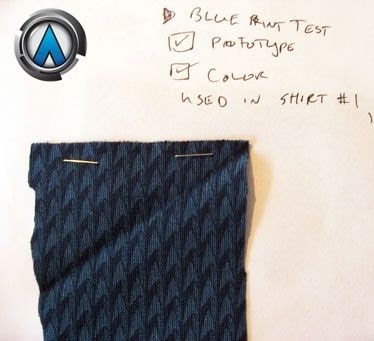 Star Trek ’09 is one of my favorite summertime movies. In fact, I think I'll throw it on right now.

If you'll excuse me... The Future Begins. 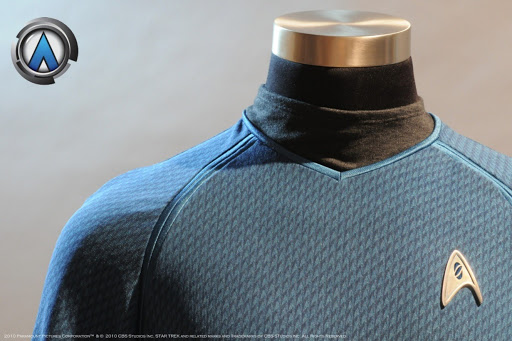 Relive this Summer Classic with these In-Stock Tunics and Dresses! 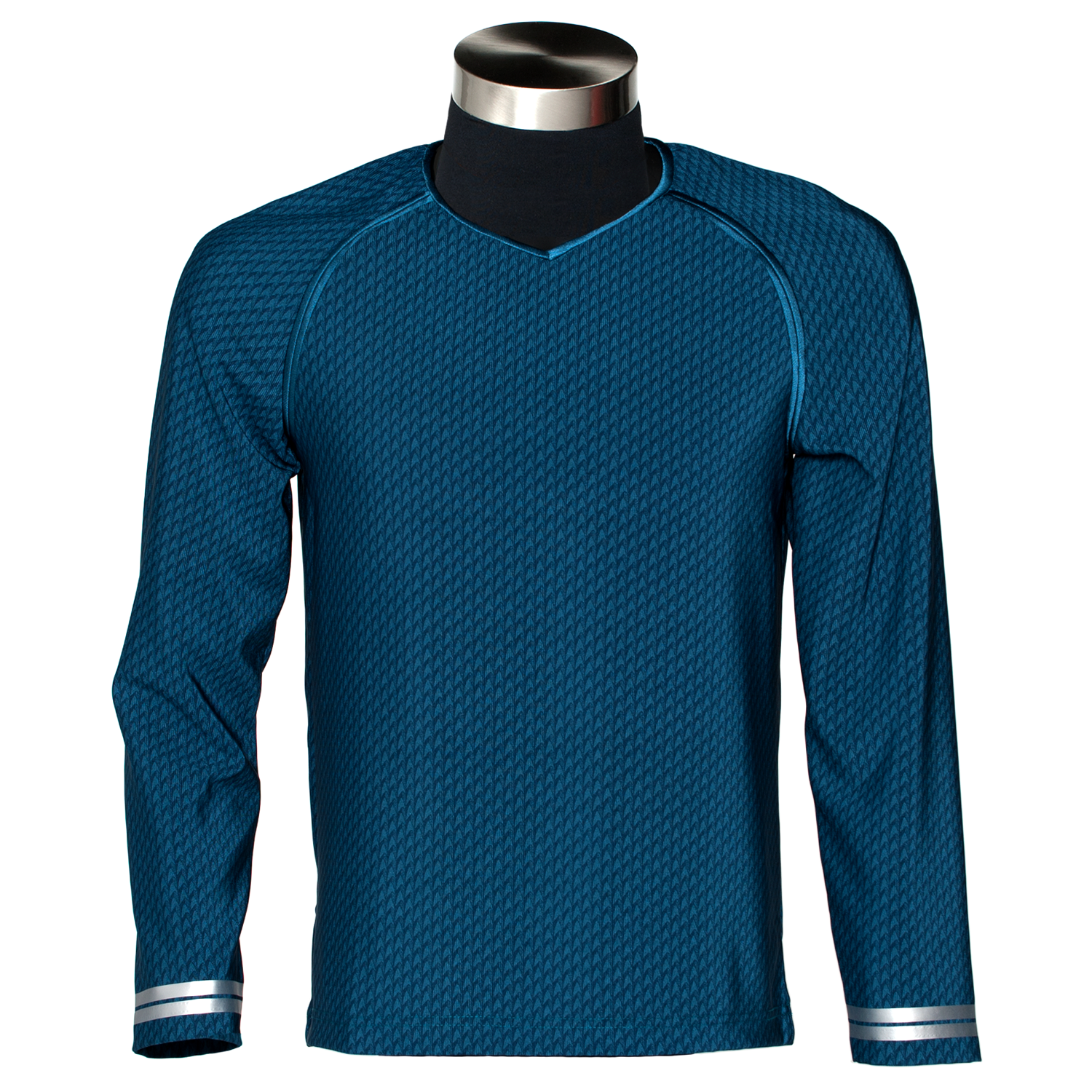 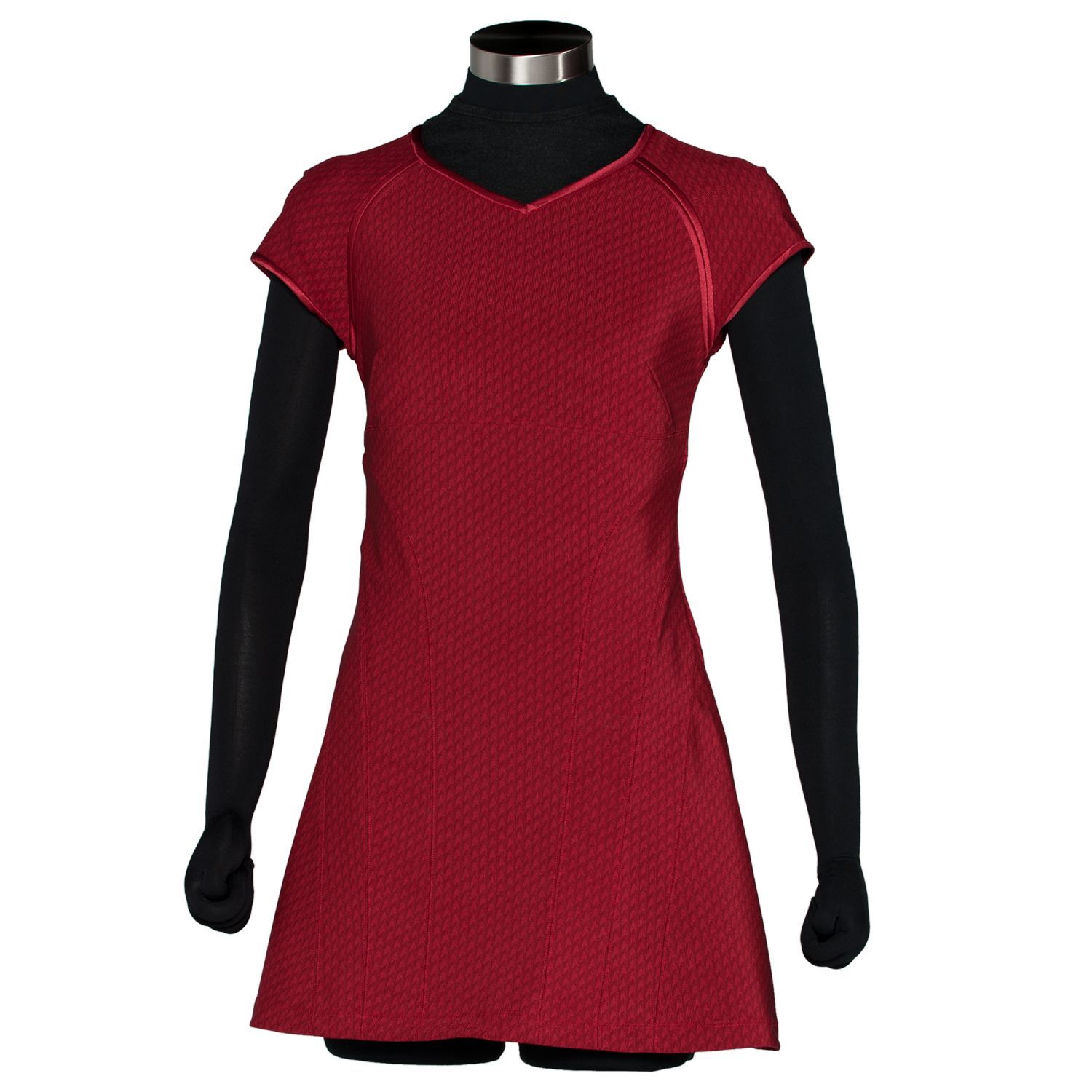 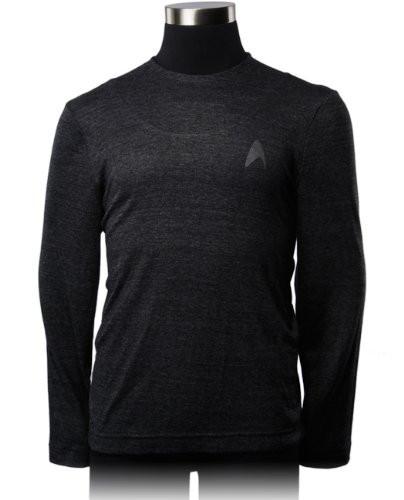 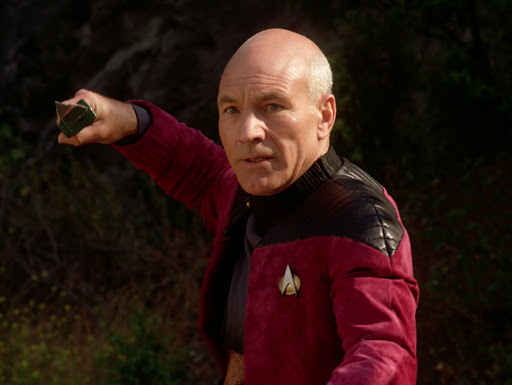 Captain Jean-Luc Picard and the Tale of Darmok 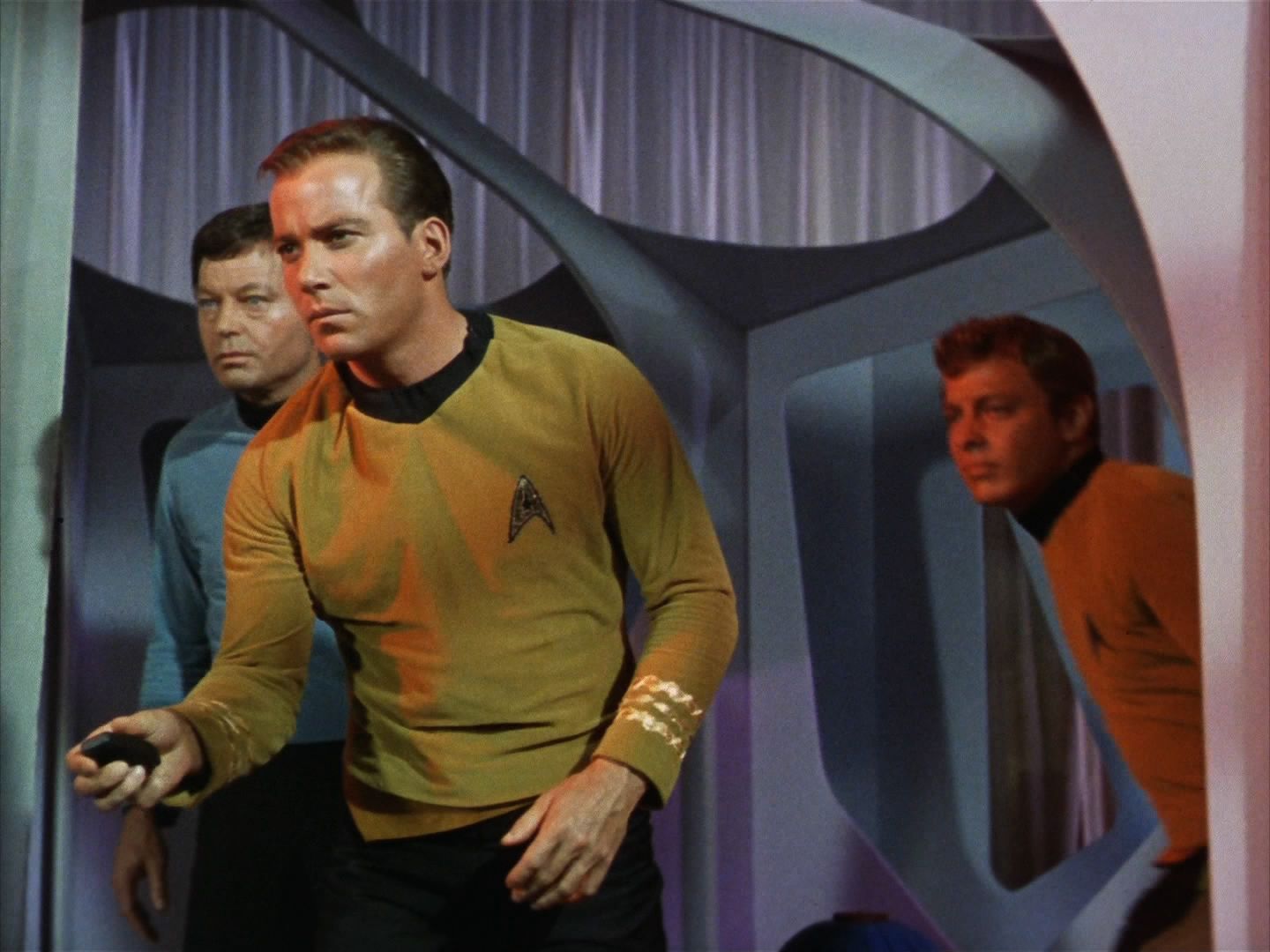 Learn about STAR TREK's origins as one of the first Space Westerns. 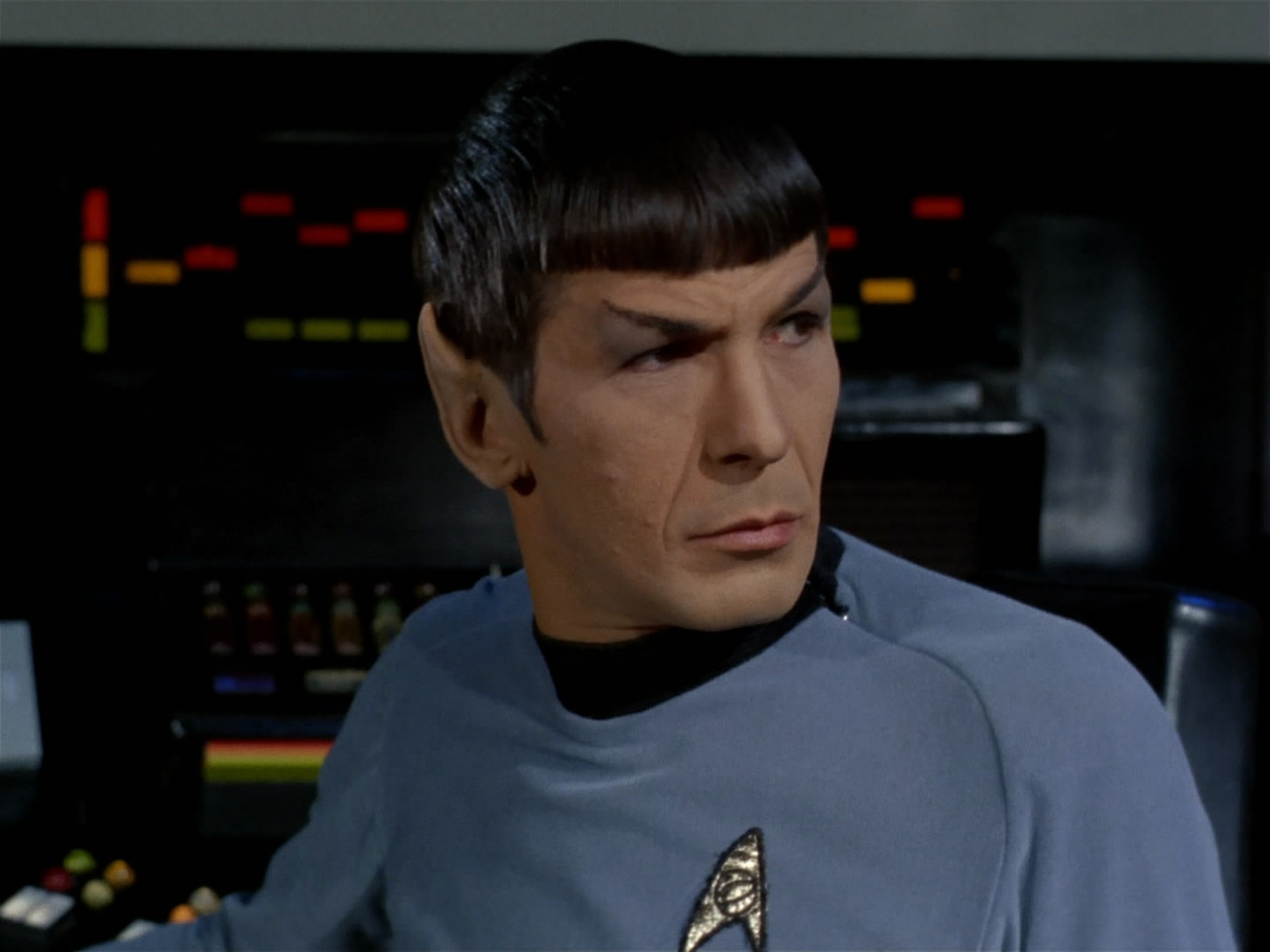 Explore the Origins of Vulcan ears, and how they were designed.

Designed to a Vulcan's Specifications