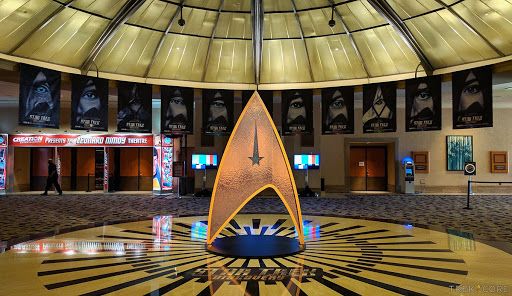 The rotunda of the Rio Convention Center.

This past weekend felt weird.

Like I was missing part of myself. Oh, the week was fun. We got the premiere of STAR TREK: LOWER DECKS (which was awesome by the way), and with it some fun conversations with other Trekkies, but as the week pulled into Friday I just started to feel antsy. Like I was somehow spending too much time sitting down. And I kept wanting to talk about Star Trek...anything Star Trek. “What do you think of the new show?” "What does a sonic shower feel like anyway?" "Are you conscious of dying every time you use a transporter? Is that why Dr. McCoy really hates using them so much?" I know I probably drove my wife and daughter nuts playing TOS and LDS all weekend long.

In retrospect my symptoms had an obvious cause. I was missing STLV. 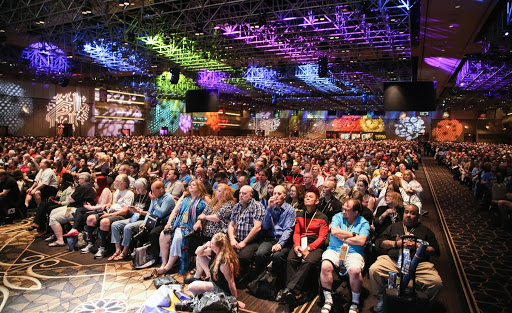 Fans enjoying a panel discussion in The Leonard Nimoy Theater.

"STLV", is of course "Star Trek Las Vegas", the planet's largest annual gathering of Star Trek fans. Every year at this time, Trekkies & Trekkers from everywhere around the globe meet up at the Rio All Suites Hotel & Casino here in Las Vegas, Nevada, USA, Earth, Sol System, Sector 001 of the Alpha Quadrant.

Speaking as a member of the con-going Trek fandom, our entire year revolves around this convention. I know for some ‘Geek New Year’ is celebrated at SDCC, but for those of us that know who "The Great Bird of the Galaxy" is, STLV is “The Big Show.” For obvious reasons, that show didn't happen this weekend. It's been postponed till December, and hopefully still happens. But, it won't quite feel the same - nor should it.

Let it be its own unique thing for this unprecedented time.

I missed the convention...  Correction, I do miss it.

As I sit here writing this piece, I should be recovering from the hardest work I do & simultaneously the most fun I have all year.

For me that means manning the ANOVOS booth at "The Khan." Tuesdays are spent unpacking, assembling, and setting up our booth and its contents. It's a lot of work, but interspersed with those activities are moments to meet up with old friends. Friends from CBS who are usually busy setting up their own amazing exhibits, and friends who are fellow licensees hard at work setting up their booths. All these people make up the core of our community. They are more than just colleagues, they are family.

Tuesday night's "Preview Night" and it's the first chance we have to see the other half of our extended family - the fans. There's nothing better. Hugs and Vulcan hand salutes everywhere. People who haven't seen each other in a year pick up conversations that feel like they were paused yesterday. It's warm, it's comfortable, and it feels like home.

The rest of the convention feels like that. Don't misunderstand, it IS work, but it's the most pleasant kind of work. We're all on our feet for about eleven hours. We usually try to have a schedule, kind of a rotation of sorts where people cycle out of the booth for a few hours. It never works. For example - I never want to leave. And it's not because someone from a Star Trek show might float past our booth, it's because we have so much fun seeing everyone.

Some days I never leave the booth at all. 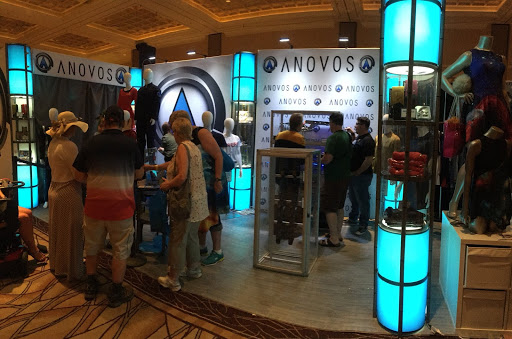 The ANOVOS exhibit booth during a lull at STLV.

There are lulls in the action. Like the tides, there’s an almost predictable ebb and flow. "Low tide" - William Shatner is on the stage in the Leonard Nimoy Theater. These pauses are a breather. A time when you can even drift from your booth to a friend's on the same isle (mustn't get too far away). 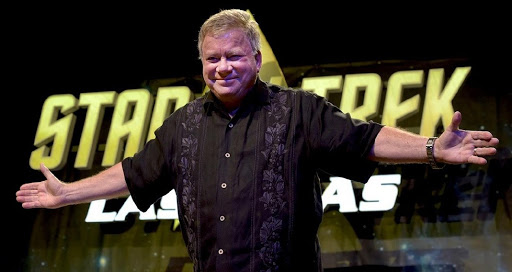 Captain James T. Kirk himself, William Shatner, on the main stage at STLV.

ANOVOS, Gold Bubble, Eaglemoss, Chronicle Collectibles, Hallmark/Pop Minded - we're all usually in the same area. We're all friends and we love to catch up with each other. "What are you guys working on?" "How's the fam?" "Is that a Tribble?" At this point in the game, we all know everyone very, very well, and there's a real sense of community.

"High tide!" William Shatner has just left the stage, and everybody's coming back into the exhibit hall. At first it takes you by surprise. One moment you're having a nice convo with John Byrne about his Star Trek: New Visions series, the next - people have multiplied around you like tribbles.

You get a feel for it in time though. When you're in tune with the larger convention going on around you, you sense when there's a change. A few more people trickle past you in the aisle than there were a moment ago. The noise level starts to increase...just a touch at first, it grows louder every thirty seconds or so. Almost instinctively you start to drift closer to your booth and by the time you're there so too is a horde of people. The decibels go up and so does the temperature. Where you needed an Archer jacket when everyone was at the panel, it gets warm in the hall as all the fans hit the floor again.

More conversations. New faces mix with the familiar - but here - in this Temple of Trekdom, we're a family. "We Reach" and we all "Grok Spock." 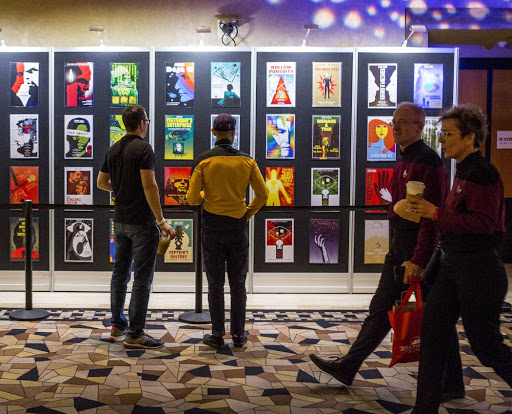 Since 2016 & the 50th Anniversary of STAR TREK, STLV has been a five day event. It's a long haul of a convention (especially for those that just wrapped SDCC right before it), but it's always a pleasant one.

Almost the opposite of the manic hurricane of ComicCon. The days spent at the con go very much like I've described it here. Seeing and greeting friends old and new. People we love, and people we've just met, and everyone sharing stories, observations, and affection for the global phenomenon called STAR TREK. Not bad for a little TV show that just barely had enough episodes for syndication.

An aisle in the STLV exhibitor’s hall.

Sunday comes and there's a slight spiritual scent of Dikironium in the air. Bittersweet. People still attend panels, and come to the booth, but there's a soft melancholia to the day. No one really acknowledges it, but it's there.

People drift into the booth to make last minute purchases and say goodbye. "See ya next year!" "Yeah, we'll be right here!" "Live Long and Prosper!" "Peace and Long Life!" "Can't wait till next year!" "Till then..."

The exhibitors work fast to strike our booths. We're all tired, and with the guests off the floor and off to farewell parties and dinners, the air conditioning to the hall is turned off. The large doors open to the loading docks and Las Vegas' August evening heat hits you in the face. Work faster. Let's get going, but hang on. See the guys over there? Let's go help them with their stuff. We are a community after all and help is always there when needed. 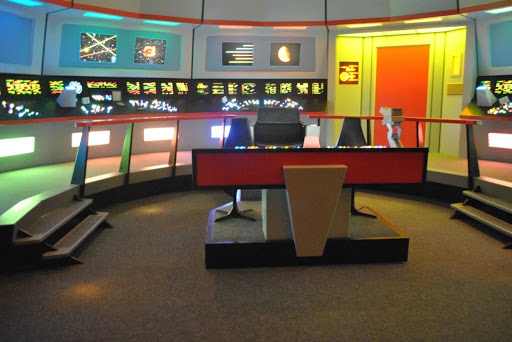 Time to go. We get our backpacks together, but hang on...let's go see if the CBS folks are still in “mission control”. Let's say goodbye.

"Hey! The Enterprise bridge set is still up, let's check it out?"

We head out, bumping into lingering Trekkies, most of whom we know personally. More hugs and kisses. "See ya next time?" "Of course." 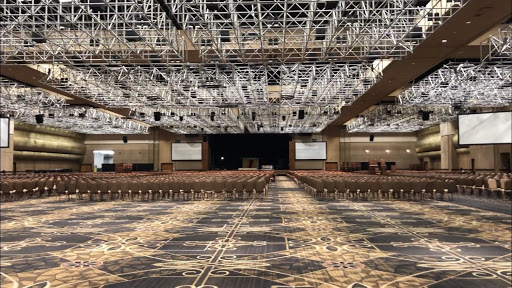 Of course we know "Next time" hasn't come yet. It's been postponed.

Hopefully only till December, but then none of us really know for sure. That's life though right? You can never really know. I know that there are people we saw last year at STLV who aren't with us anymore.

Covid? For some...sure, but like someone once said "On a long enough timeline everyone's survival rate drops to zero." It's worth remembering that though. None of us ever really know how long any of us are here, So be good to each other. 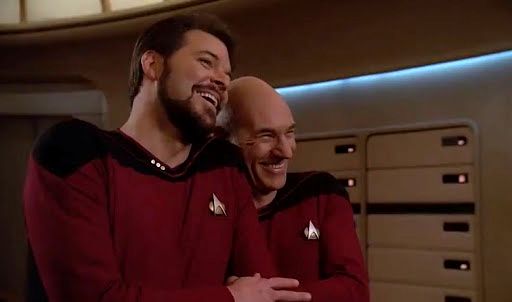 Jonathan Frakes and Patrick Stewart during the second season of STAR TREK: THE NEXT GENERATION.

Treat everyday with your fellow fans like a day on the floor of STLV! We have become a splintered collective as a fanbase. Some of us like things about the franchise, some do not, and that disagreement spills out into social media like cancer from a ruptured cell. Stop.

Like we did behind Bjo & John Trimble to get a third season of TOS.
Like we did when The Committee organized the First Star Trek Convention. 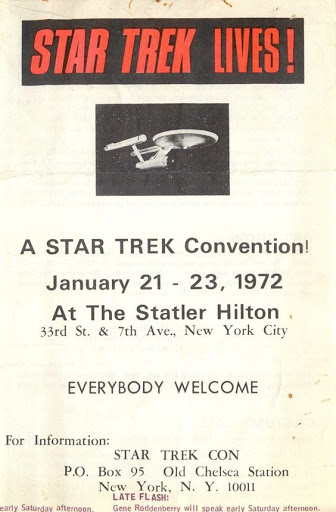 Announcement flyer for the First STAR TREK Convention ever held.

Let us Unite like we did when we caused NASA to name the first Space Shuttle "ENTERPRISE." Like when we rose up around the world and founded thousands of Star Trek Fan Clubs. 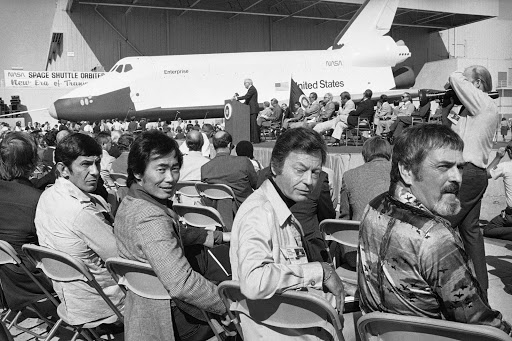 The Cast of STAR TREK at the roll-out of the Space Shuttle Orbiter “ENTERPRISE.”

Unite like we do every year at Star Trek Las Vegas.
We need reunification, and it can happen. Try. 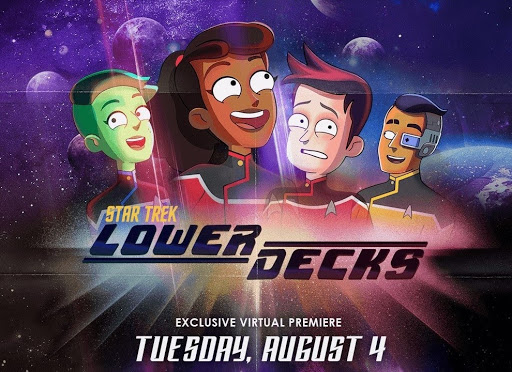 This week saw the launch of a new show and a new time for Star Trek. During the virtual premiere friends and colleagues kept saying how nice it was to meet up.

How great it was that we could share the event together, even if it was via computer.


They were right, it did feel good. In the absence of STLV I've seen fans take to social media and post pictures and recollections of past Khans. I've seen videos, chats, and virtual meet-ups happening all over as people come together to reconnect & reminisce. 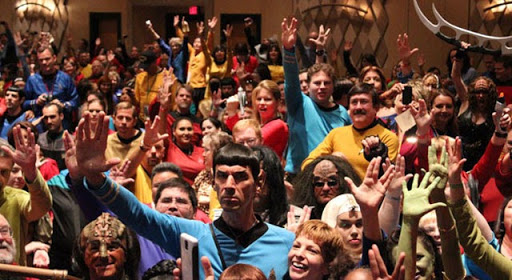 And at the center of it all is a shared love.

Love of Star Trek, sure. But, more than that - love for our community, and most of all love for our friends & fellow fans.

For yourselves and for the fandom, keep it up.
We need that kind of unity now more than ever. 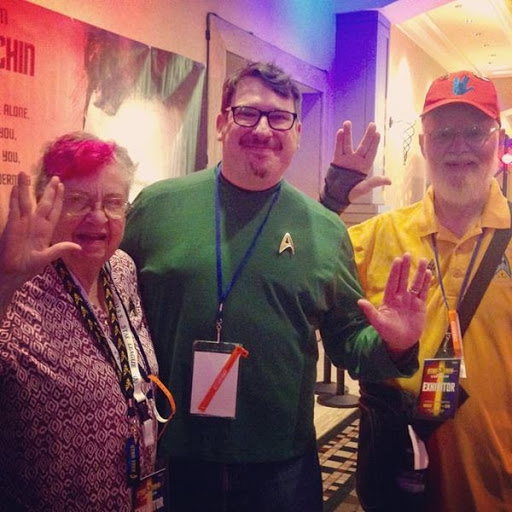 And when confronted with a friend that maybe doesn't share the same perspective as you do remember IDIC. I know someone out there will remind us all that Infinite Diversity in Infinite Combinations was a concept designed to sell a widget and that they're just words.

Perhaps. But good words. That's where ideas begin. Maybe we should listen to them.