← Prev | Next →
Blog > Star Trek Discovery | A Schism in the Fandom

Star Trek Discovery | A Schism in the Fandom

I hope this new year is treating you well so far. We have a lot to look forward to, especially with more Star Trek on the horizon and that's good news for all of us. Well, most of us anyway.

It's profoundly sad to me to see that in an era when there is such division all around us, there seems to be a schism within our own fandom. There is a small segment of Trekkers that can't seem to find the joy they once did in watching Star Trek along with the rest of us.

As a Trekkie since the age of four, I've devoted a huge portion of my life pursuing the study of Star Trek in all its forms. I’ll admit that at various stages of my life and within the almost 55 year history of the franchise - there were things I perhaps didn't enjoy as much as others.

But I always "got" what the producers were going for, and it was all Star Trek to me. 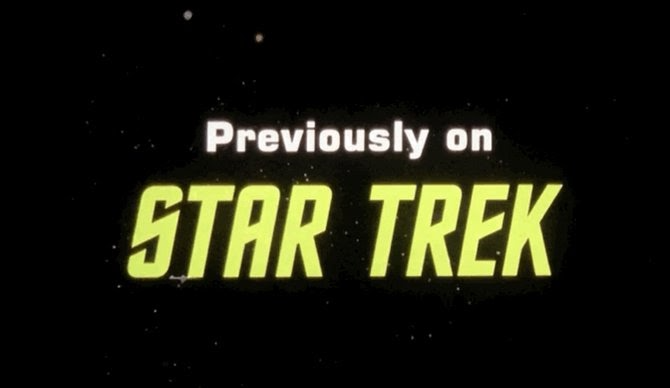 I'll admit, some fans have a few quite valid criticisms regarding plot and story development that perhaps production glosses over too easily. I wonder sometimes if the sheer number of producers on Discovery means that there’s just “too many cooks in the kitchen?”

An episode of any show benefits from a strong, singular vision. I’m reminded of Gene Roddenberry re-writing script after script himself during the first two seasons of The Original Series. Contrast that with the latest episode of DIS which had three credited writers, and no less than twenty listed producers!

But, those issues are only part of the problem long-time Trekkers seem to have with these new shows.

Perhaps what some Star Trek fans find difficult to process is more esoteric. I think what causes a lot of problems for some is rooted in why modern Star Trek feels so different to what they’ve watched in the past.

I've read missives from people who go on and on about what they perceive to be "bad writing."

I've had people tell me Michael Burnham is a "Mary-Sue'' character, and ask "Why is she always the focus of the show, shouldn't that be the captain?". Some fans have a problem with the prominence of characters who are people of color, or whose orientation is something other than heteronormative. And some even get angry with how often a character cries during a difficult situation. 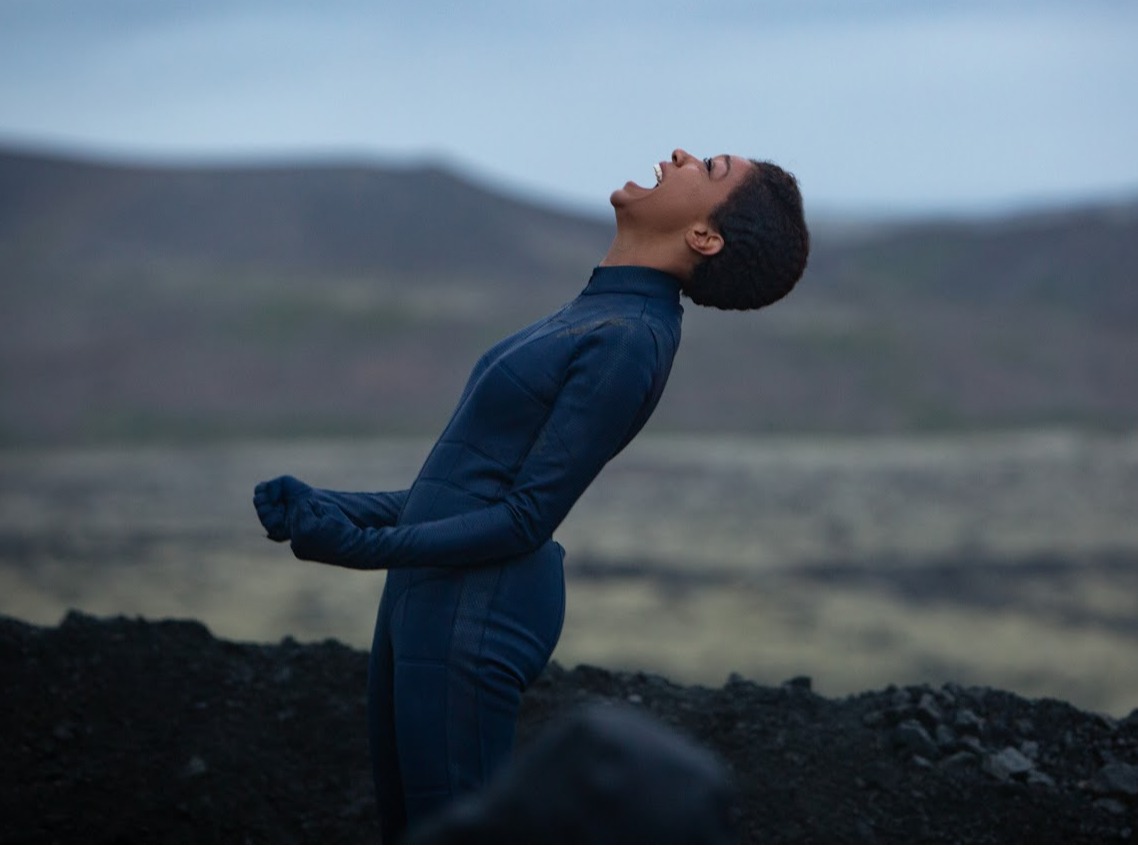 These complaints and others fester within certain corners of the fandom, and I think are born out of a fundamental confusion about how TV stories have evolved in the first two decades of the 21st century.

Think about it. The last weekly Star Trek TV series, Star Trek: Enterprise entered development in June of 1999. Debuting in 2001, it was a product of the 20th century and in many ways a perfect example of the prior 18 years of contiguous Star Trek TV productions.

It's that very 18 year span that led to a homogenization of style - in both story & design - that causes so much confusion among viewers today. It’s a situation that’s led to similar kinds of complaints throughout Star Trek’s history. 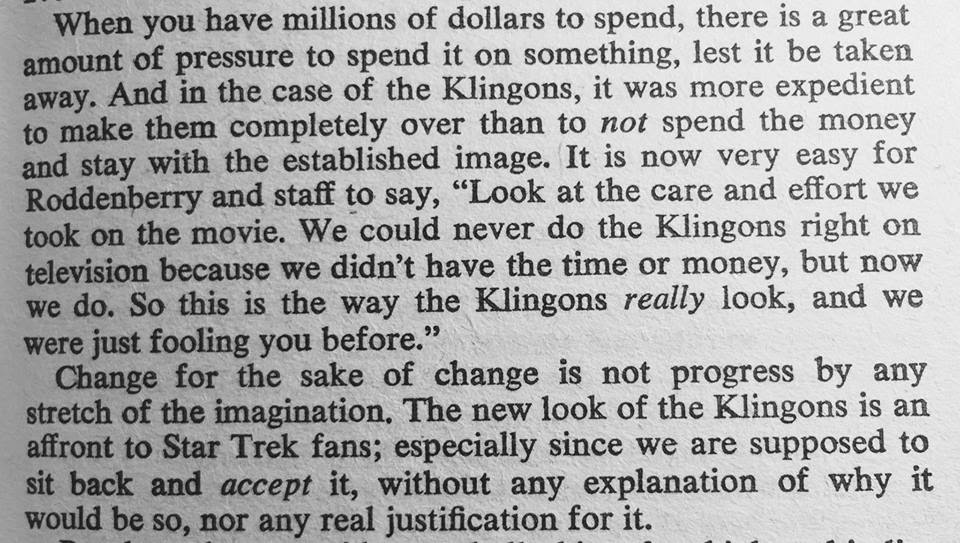 From an editorial written in 1979 by a Trekkie aggrieved about the Klingon race’s appearance in Star Trek: The Motion Picture.

An example of this is the question "Why do Klingons look so different?"  The answer of course is the Klingon look has always evolved with the times. 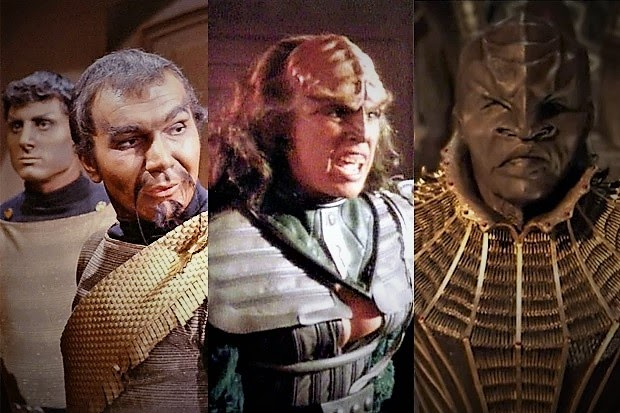 Klingons depicted from The Original Series, to The Next Generation, to Discovery.

From TOS to TMP to TNG to DSC, the aesthetic of the Klingon race has always changed with the production teams of the era. The same can be said for every species depicted in the decades long history of Star Trek.

Want proof? Check out what an Andorian looked like in TNG! 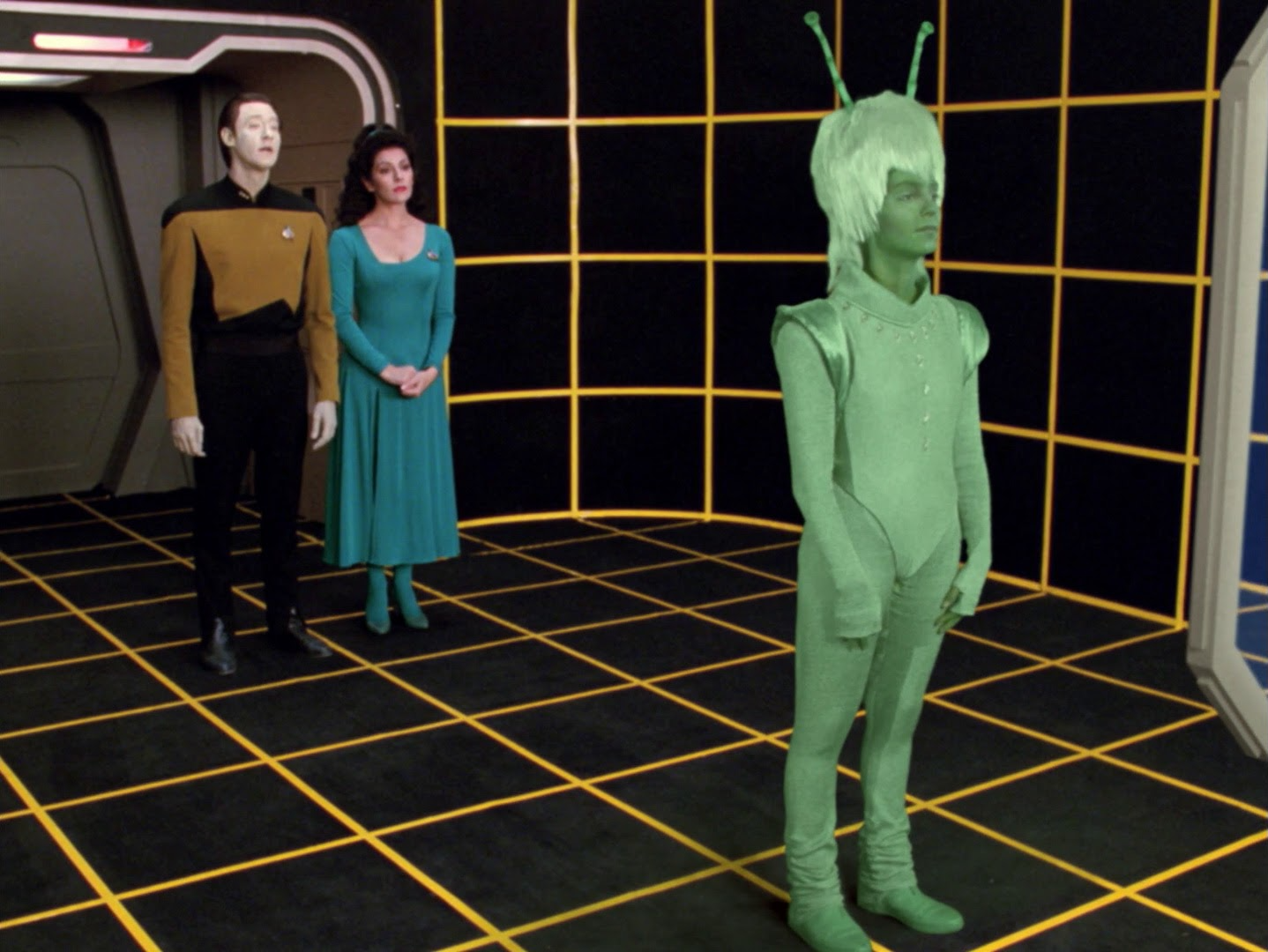 Data’s first daughter, Lal as an Andorian in “The Offspring”, from Season 3 of Star Trek: The Next Generation.

The difference is the continuity of design aesthetic that Star Trek enjoyed from the late eighties to the early aughts was the result of one continuous production overseen by Rick Berman. The facts are that "Star Trek Continuity" is something Star Trek has struggled with since The Original Series. Sometimes even the U.S.S. ENTERPRISE herself, would change looks between shots in the finished episodes.

Both the pilot version and regular series “refit” of the U.S.S. ENTERPRISE near Alfa 177 in TOS’ “The Enemy Within.”

If Gene Roddenberry had difficulty maintaining consistency between episodes he was personally supervising (wait, is it Starfleet, or UESPA this week? I can't remember) then what hope is there for Trekkies who demand absolute constancy between episodes of the show separated by over fifty years? 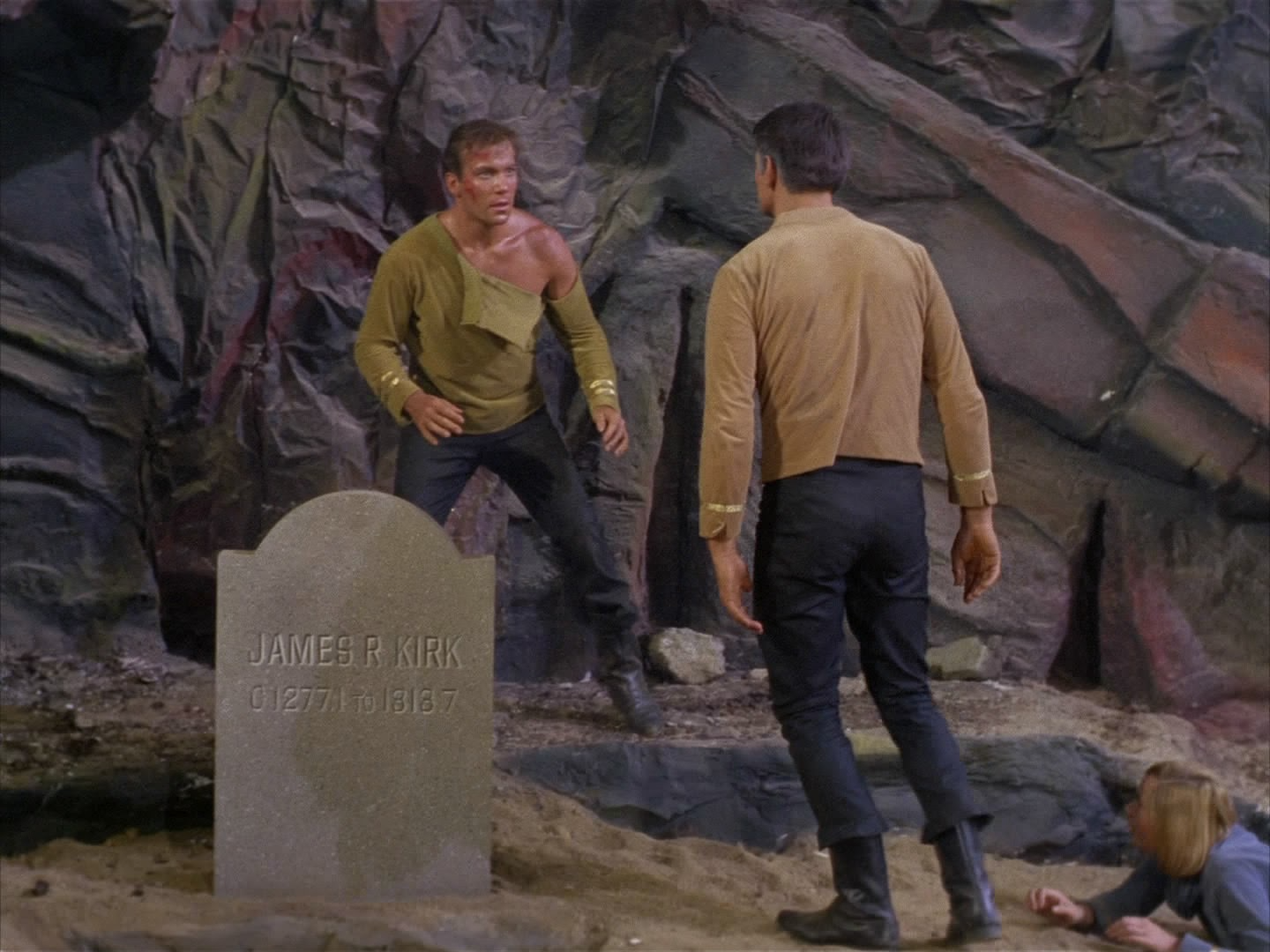 James R. Kirk (?!?) facing Gary Mitchell in a fight to the death on Delta Vega in “Where No Man Has Gone Before.”

But, there's more to it than just whether or not the Enterprise should look the way Matt Jefferies designed her, or John Eaves' 2017 design. Because those sort of design questions are secondary concerns to the stories they serve. 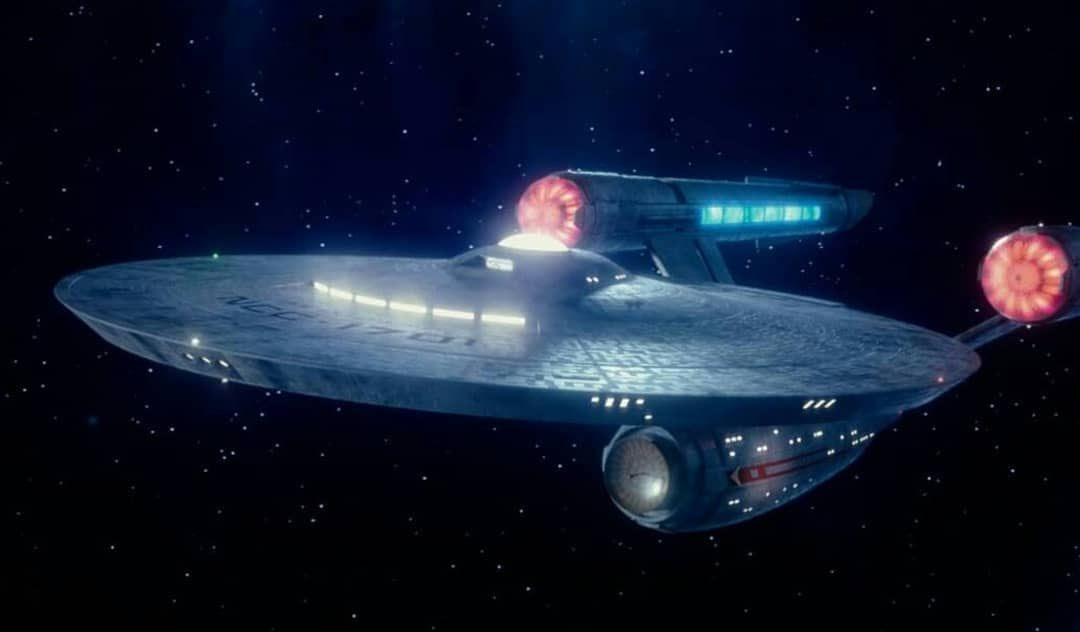 Everything in a production from direction, to casting, to craft services only exist in service to the story. And, TV storytelling has evolved at the same pace as the stagecraft that brings it to life. 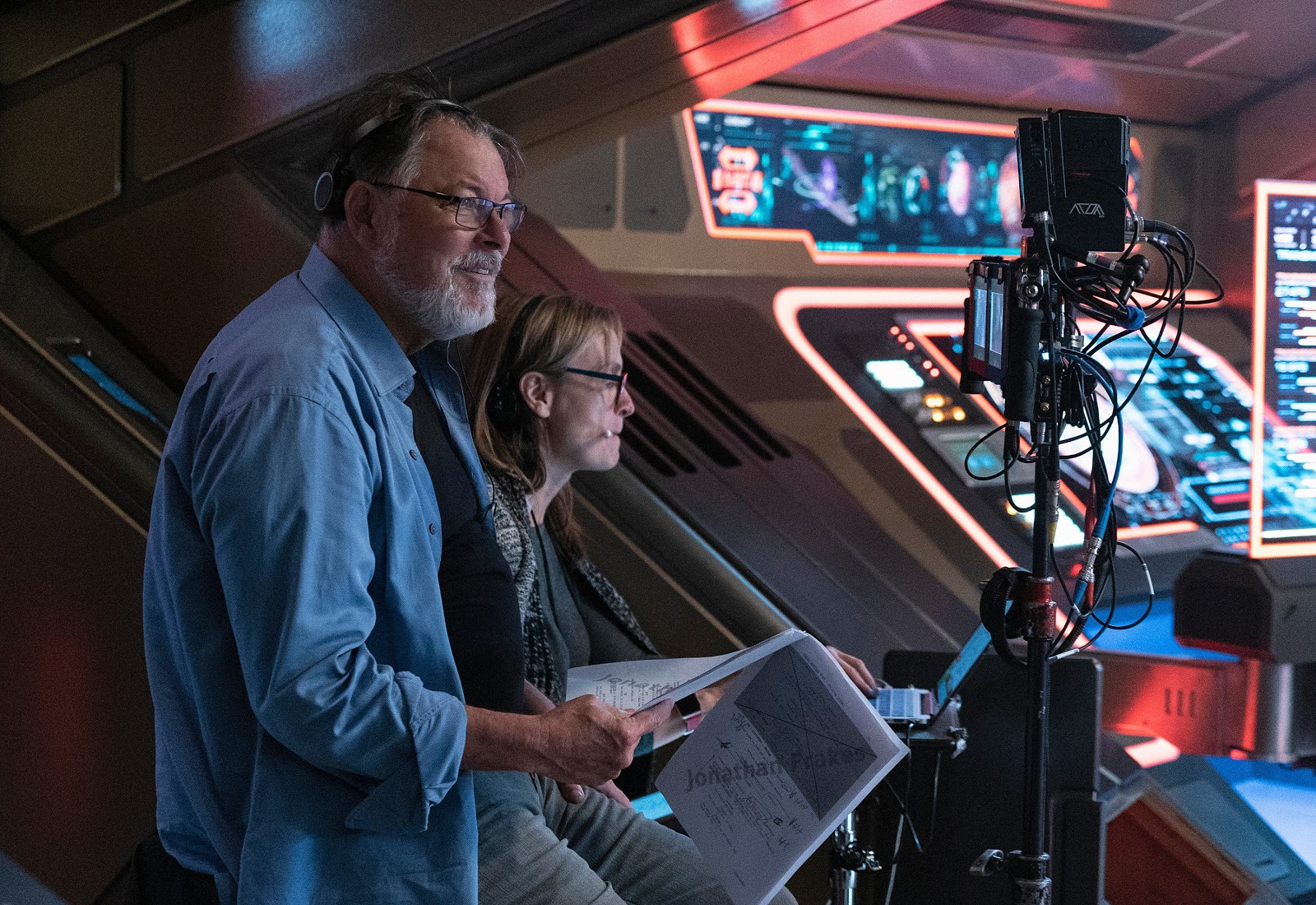 The philosopher, George Gurdjieff once said "All is story," and he was right. TV storytelling has moved on from it's 20th century origins.

What some long time Star Trek fans label "bad" may really be something they perhaps badly misunderstand. The writers rooms of Star Trek: Discovery, Star Trek: Picard, et al are staffed with writers who came of age in this century, not the last.

Their focus and means are different from what came before, and thus have a different feel.

Admiral Kirk and Commander Scott in Star Trek III: The Search for Spock.

The writers working on all these new Star Trek shows, write for themselves and their contemporaries from a point of view different from any other Star Trek writers that have come before.

Oh, they hold to the same foundations of wanting to portray a futuristic humanity that has not only survived, but learned from its past difficulties.

But they can also see the limitations of the past on the social ideals Gene Roddenberry embedded into the very DNA of Star Trek. So they put modern examples of that idealism on display in shows like Star Trek: Discovery. There’s a greater emphasis placed on diversity in the Star Trek of today than in the past.

Watching Paul Stamets and Hugh Culber form a family bond with Adira Tal today should be no different than watching Captain Kirk and Lieutenant Uhura kiss in 1968. 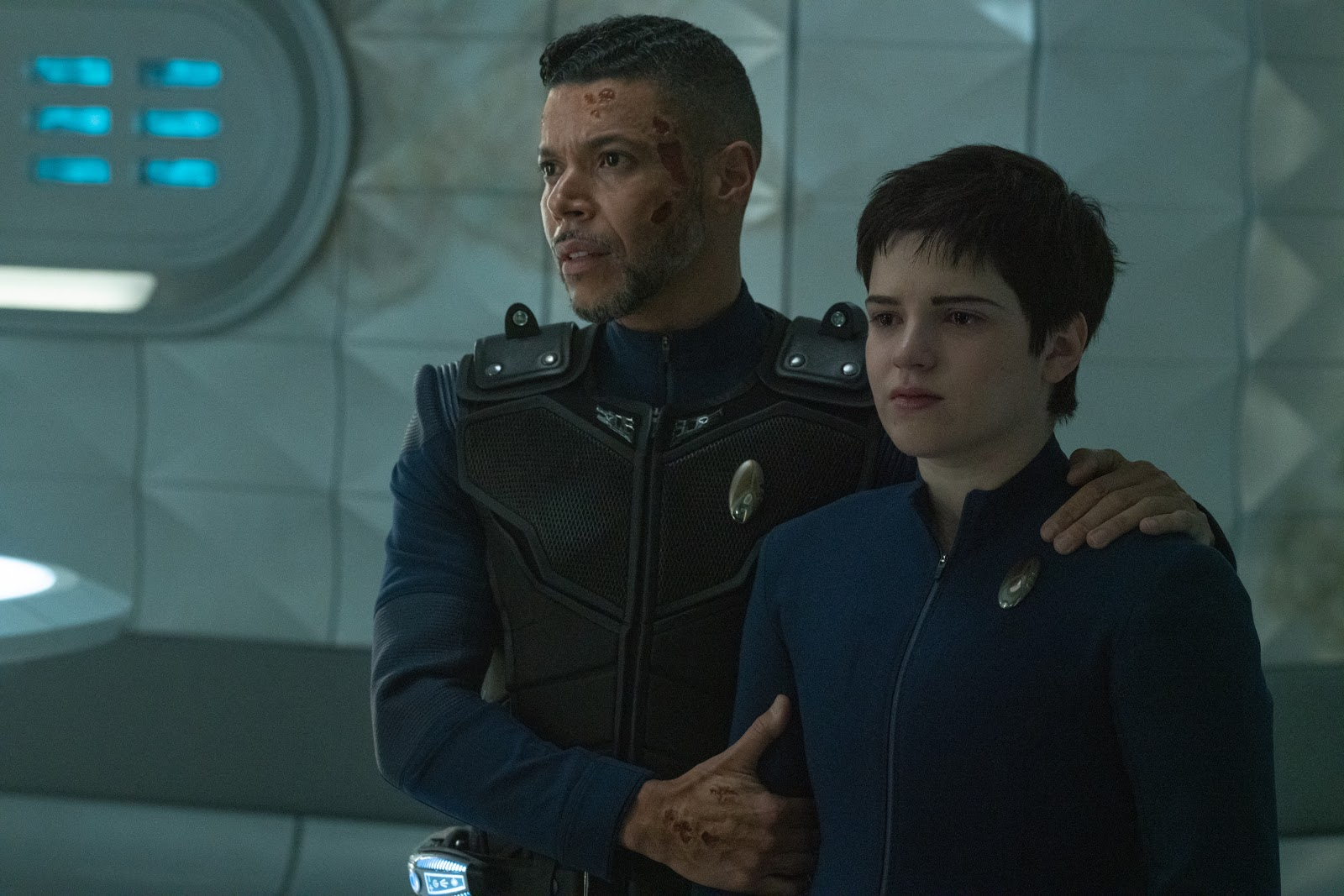 I was talking with bestselling Star Trek novelist Dayton Ward about this topic the other day. He observed, "Seeing 'people who don't look like me' is less about political messaging than it is just simply embracing greater diversity in casting. The reason people of color/etc. might seem to ‘stick out’ speaks more to how there was a tremendous dearth of them in earlier iterations."

When I was a kid growing up in the 70's I had no problem seeing myself as Captain Kirk. Not every kid from that era can say that, but a half century later my daughter loves watching Michael Burnham's show. 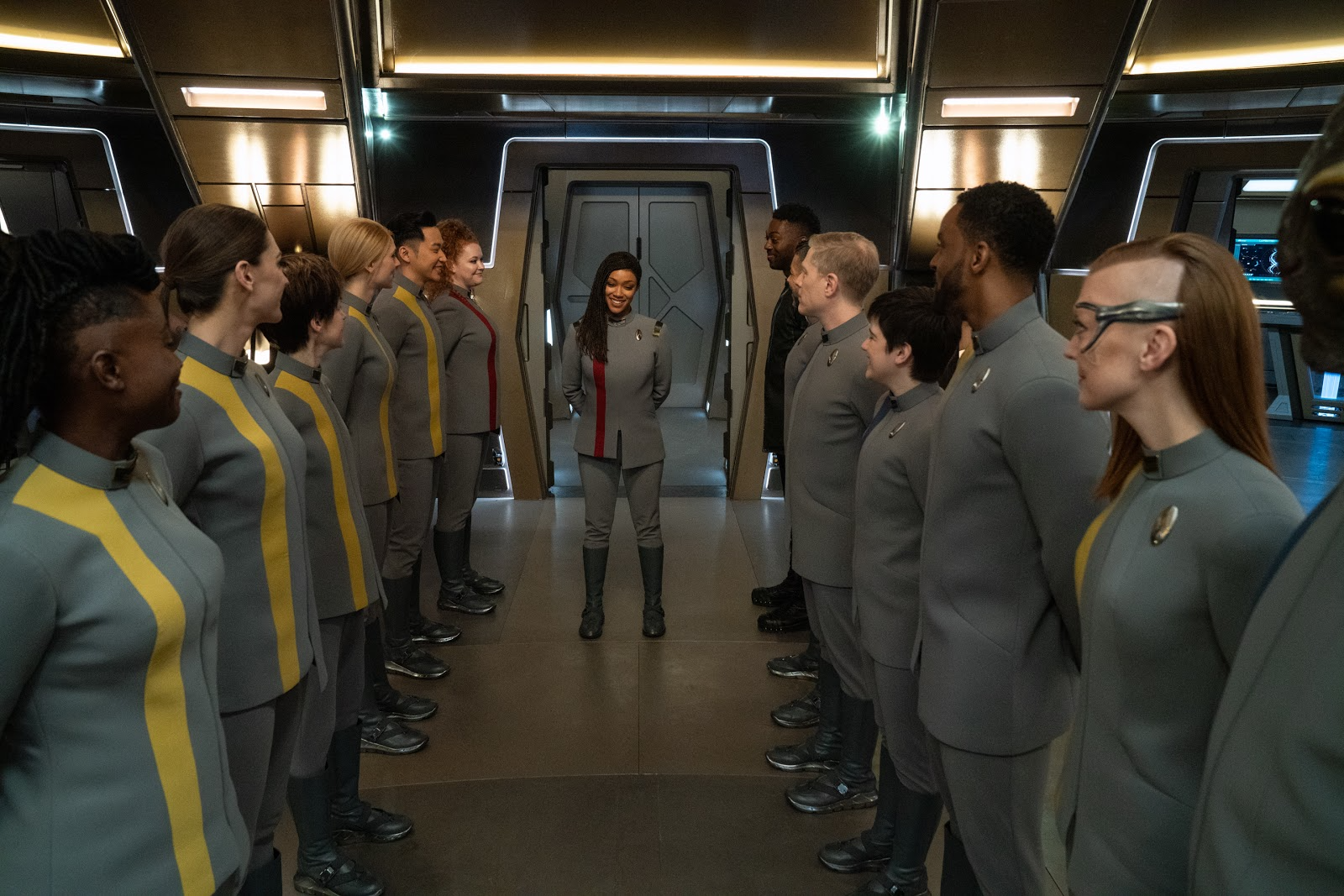 Speaking of "Michael Burnham's Show," It bears repeating for those in the back...It is HER show.

Star Trek: Discovery set out to do something new. It was created with the goal of following the trajectory of a Starfleet officer into their captaincy. 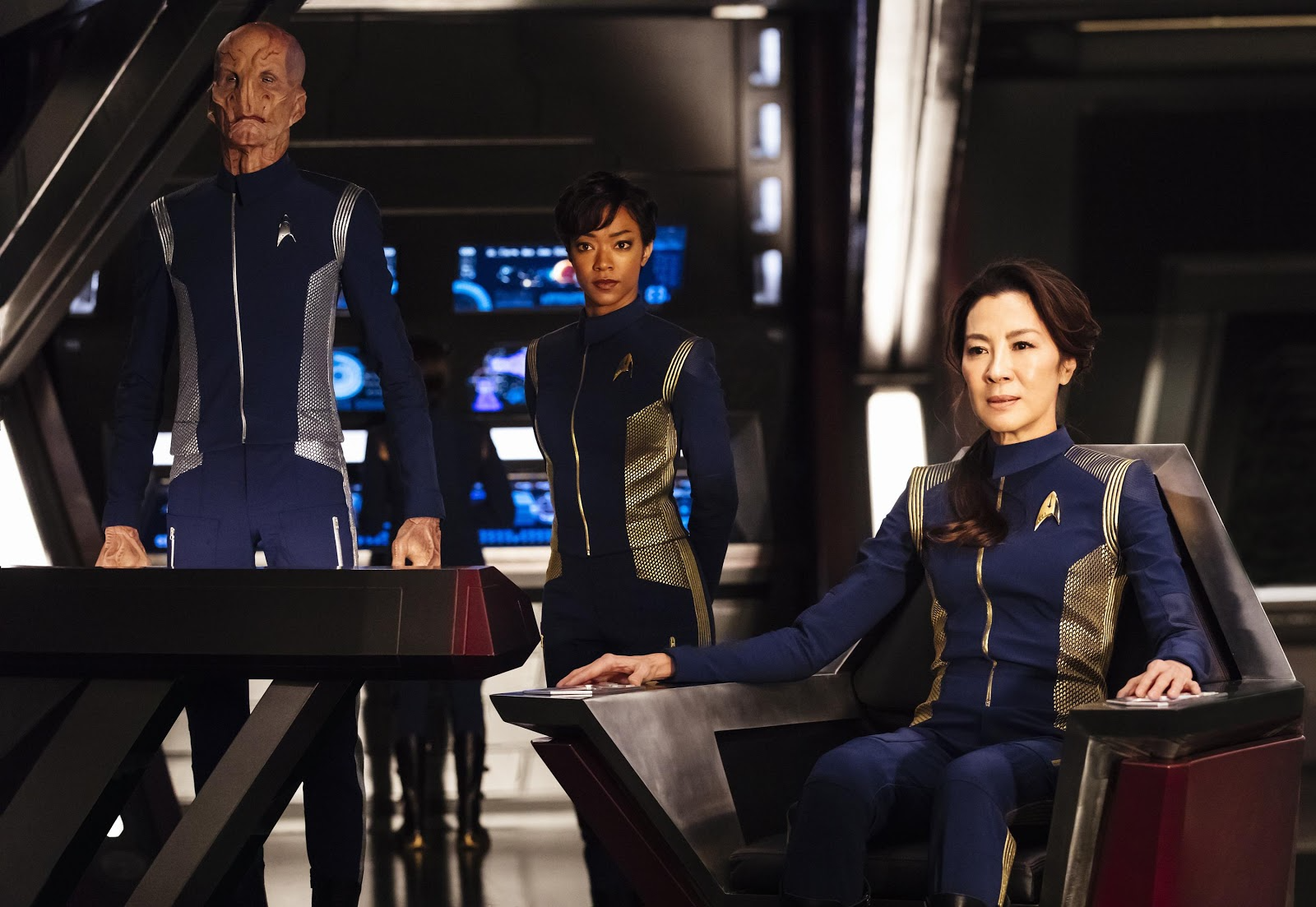 It's a much more dynamic and inclusive point of entry to a story than what we've been given in the past. I’ve heard some fans say "She's a Mary-Sue!" "The stories always seem to focus on Burnham!" "Where's the Captain?"

It seems some have missed the obvious change of focus from the captain to someone who will one day be The Captain. Sonequa Martin-Green is the first person listed on the call sheet for a reason...it's her show. 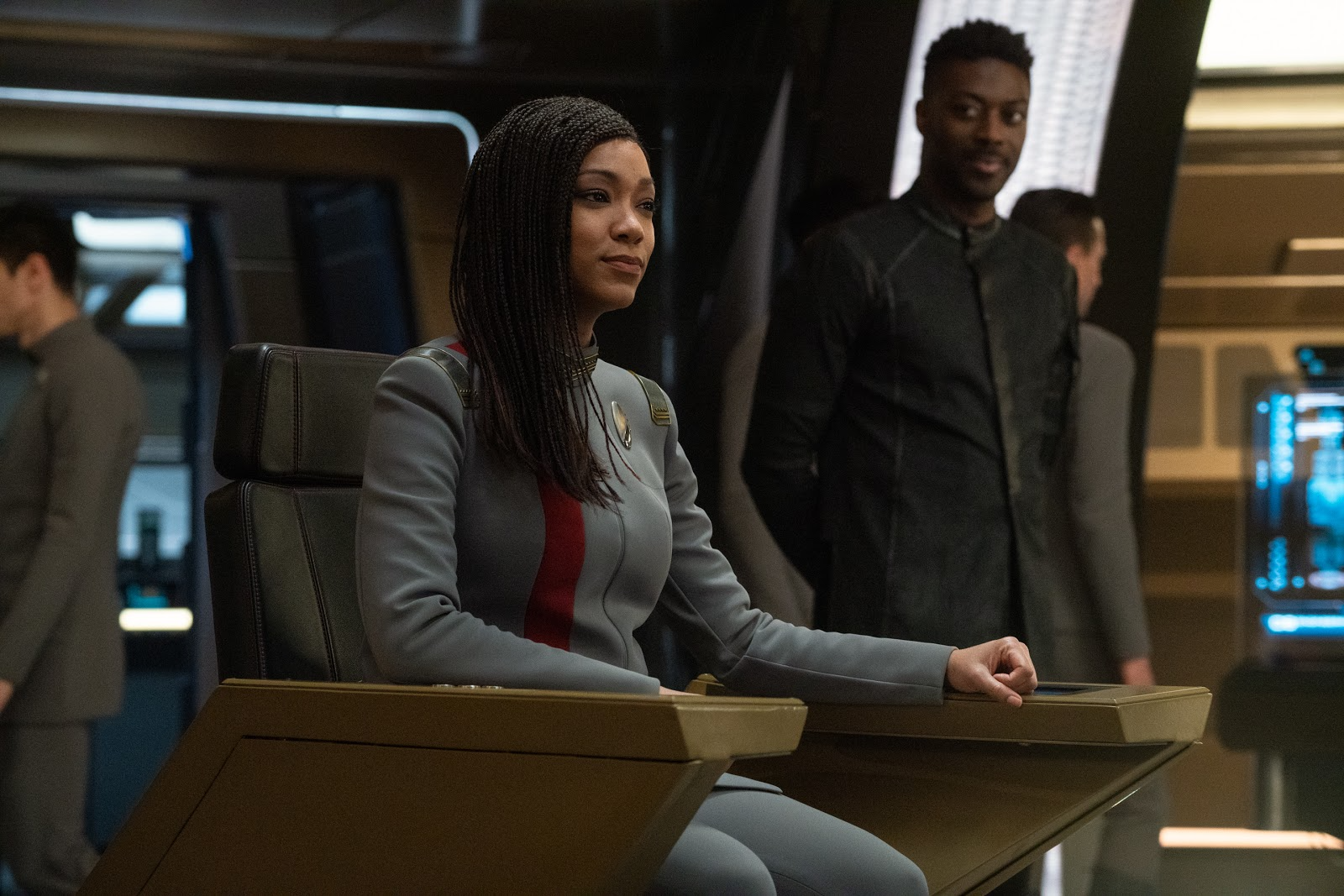 Captain Burnham of the U.S.S. DISCOVERY.

I've touched on just a few of the complaints some Trekkers have with Discovery and it's companion shows, but I have one more tiny nit to pick before I put this blog out of its misery.

Every human does it. Whether happy, or sad, tears will fall at some point or other. Some have a problem with the frequency of Captain Burnham's crying in either stressful or happy situations. 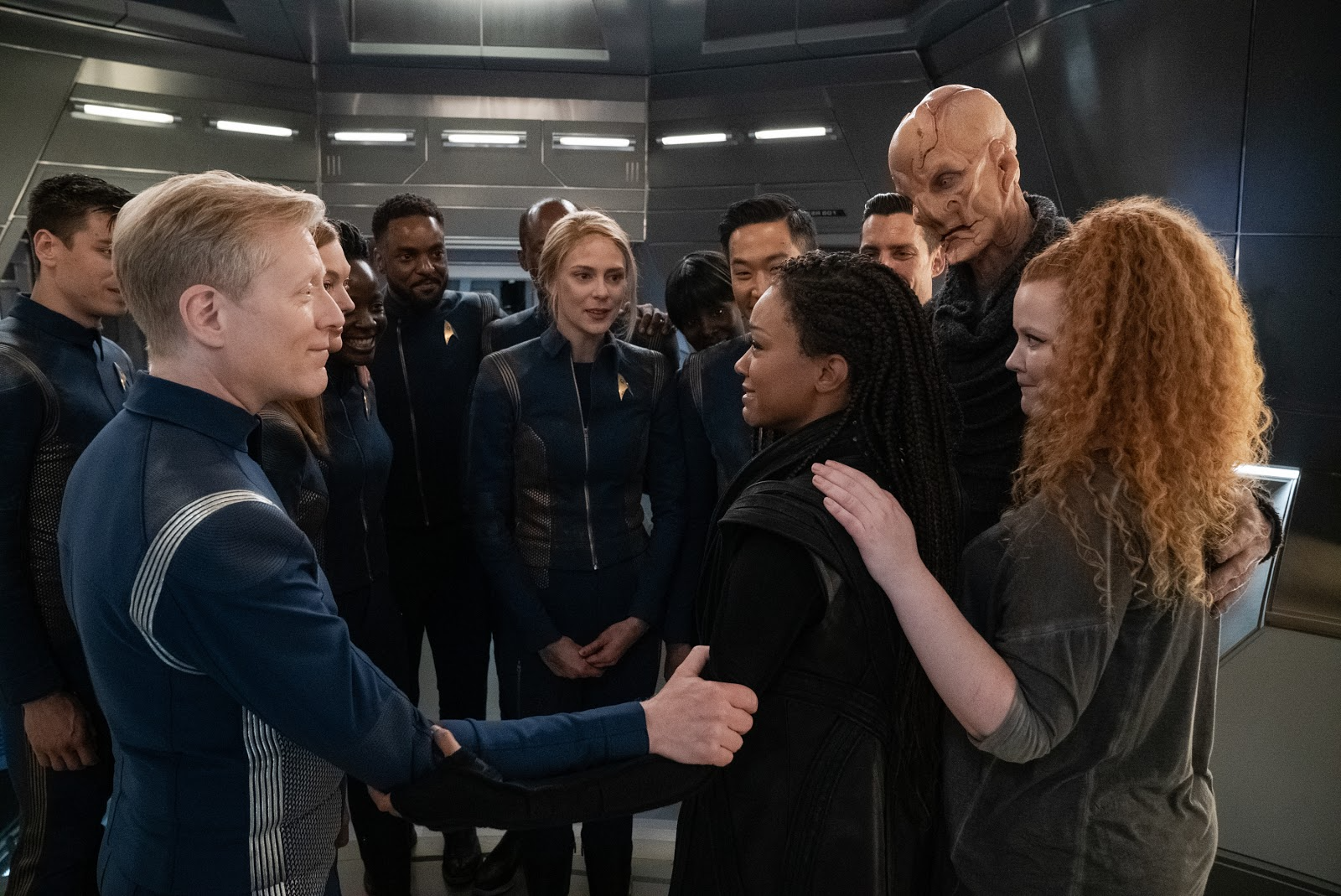 Separated for a year, the happy, reunited crew of U.S.S. DISCOVERY.

Remember when I said that this writing staff is younger, having come of age in the past twenty years?

Consider that these people are part of a generation that has been taught from a young age to be more in tune with their emotional lives. It's ok to emote, and to cry when the occasion warrants it.

Starfleet, to my knowledge, has never forbidden its officers a good cry now and then. 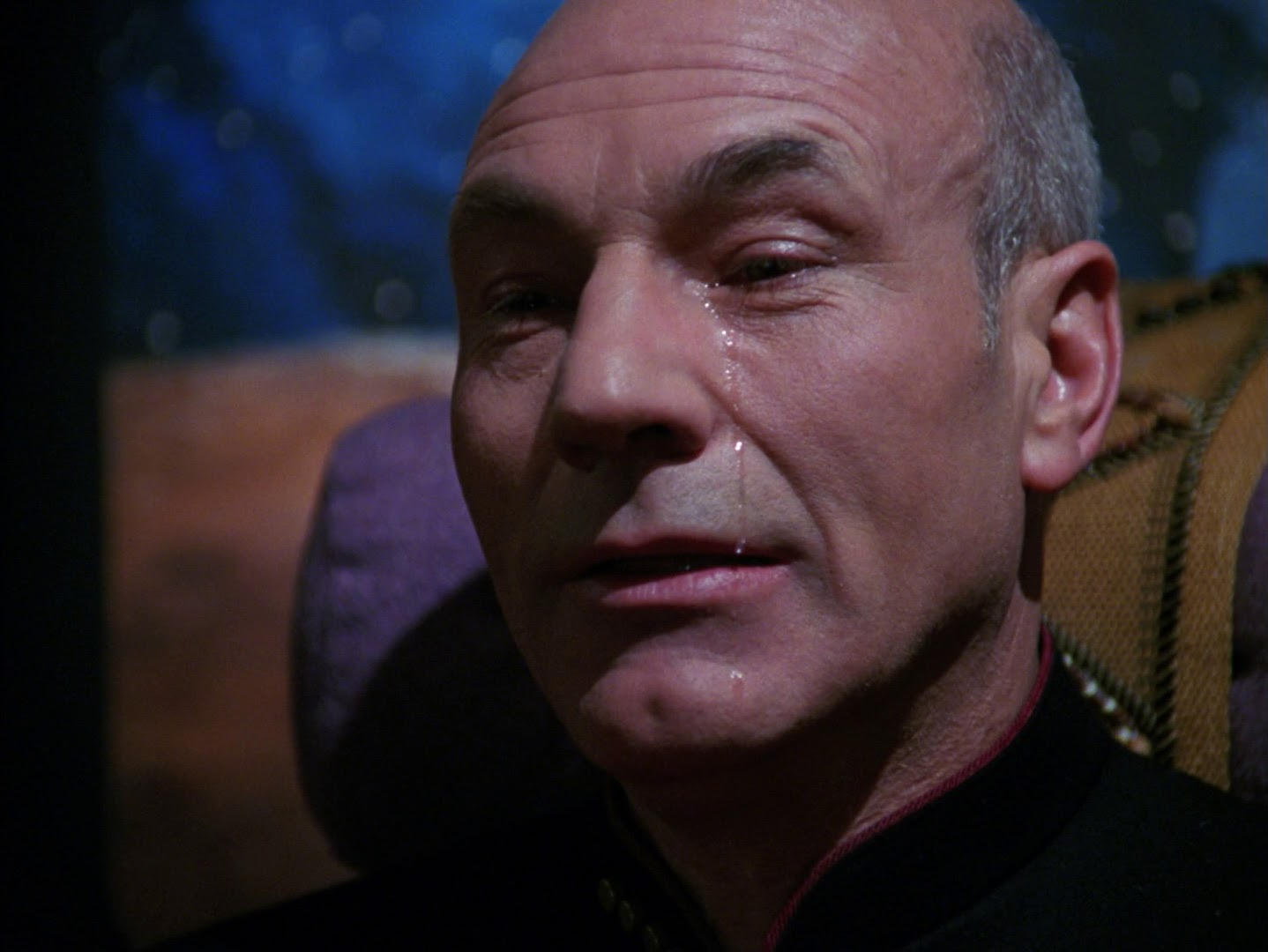 Captain Picard experiences a lifetime’s worth of anguish suppressed by Ambassador Sarek of Vulcan in Season 3’s “Sarek.”

And I would argue that the Captain and crew of the U.S.S. DISCOVERY has been through enough in their first forty two episodes to allow them the occasional sob.

Hell, if you didn't break into a good cry occasionally over this last year, I'd wonder if you even lived through the same 2020 as the rest of us. 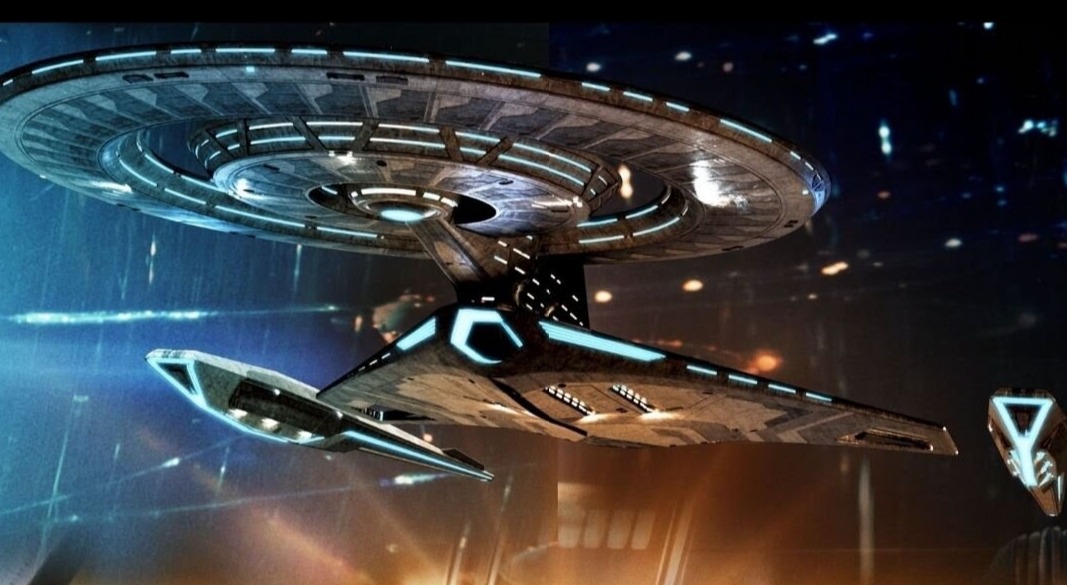 As for 2021, this year looks to be one of the best in Star Trek history!

Season One of Star Trek: Prodigy, Season Two of Lower Decks, and Discovery Season Four are all in production, with Strange New Worlds, Section 31, and more Short Treks on deck...and that’s just what’s been announced so far!

It’s a fantastic time to be a Trekkie (or Trekker, if you prefer), and we’re all having fun here in the future.

I just wish everyone could join us in that fun... but I understand that there might be some who don't.

So what say you?" 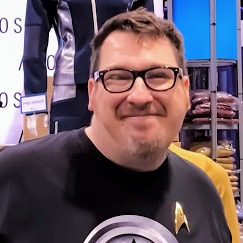 John is a writer based in Las Vegas, and a product developer for ANOVOS